How I Invented the Association Management Company (AMC) Model 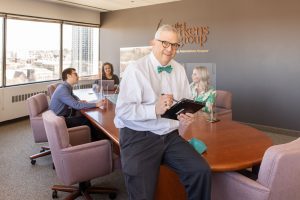 By Ben Markens, President and CEO

It was my 50th birthday. I was at the Greenbriar Resort in West Virginia, and my friend, Steve, asked me to meet him for a drink.

I was attending an association meeting for the industry that I had worked and consulted in for almost 30 years. The association was in trouble: they were losing members, the offering was stale or not being provided on a timely basis, and they had almost burned through the net assets they had accumulated over more than 75 years.

Steve was Vice Chair of the Board of the association. He asked me if I would consider becoming the President, which is what the chief staff officer is called. My immediate response was that I was flattered, and I had a business with clients that I could not just leave in the lurch, and that while I had had many management roles and had run my own company for 20 years, I hadn’t run a trade association, which he knew. Ultimately, I said, “No thanks.”

Time went by and things got worse at the association. Steve called me about six months later and said that I needed to figure it out.

That’s when I invented the AMC model.

I made a proposal to eliminate many of the expenses: salaries, benefits, rent, professional development, and the like. I would rent a new office space and hire a team to work for the Markens Group. For our professional services, the association would pay a fee a bit less than the amount they were going to save. A win-win, we hoped. I called this model a Management Services Organization (MSO). A short while later, the association’s lawyer advised me that this model existed by a different name, an Association Management Company (AMC).

After a short negotiation, we hit the ground running. I hired a crack team and we learned association management. It helped that I already knew the ins-and-outs of the industry. We made a lot of quick moves, all focused on increasing member engagement, tailoring offers to create value for the members, and using my network and the network of the Board to entice old members to return and get new members to join.

What’s in a name? Tomato or To-mah-to. MSO or AMC. I am taking credit for inventing AMC all the same.

With tongue in cheek,